Blackshear Elementary opened in 1891 as the first public school in Austin area for African American students. It is located on east 11th street in heart of Six Square, Austin’s Black Cultural District.  Two years ago Betty Jenkins and the staff transformed the school into a Fine Arts Academy, the first elementary school in Austin ISD to earn that title.  A year later it was named a National Blue Ribbon School, with STAAR scores significantly above state and district averages. 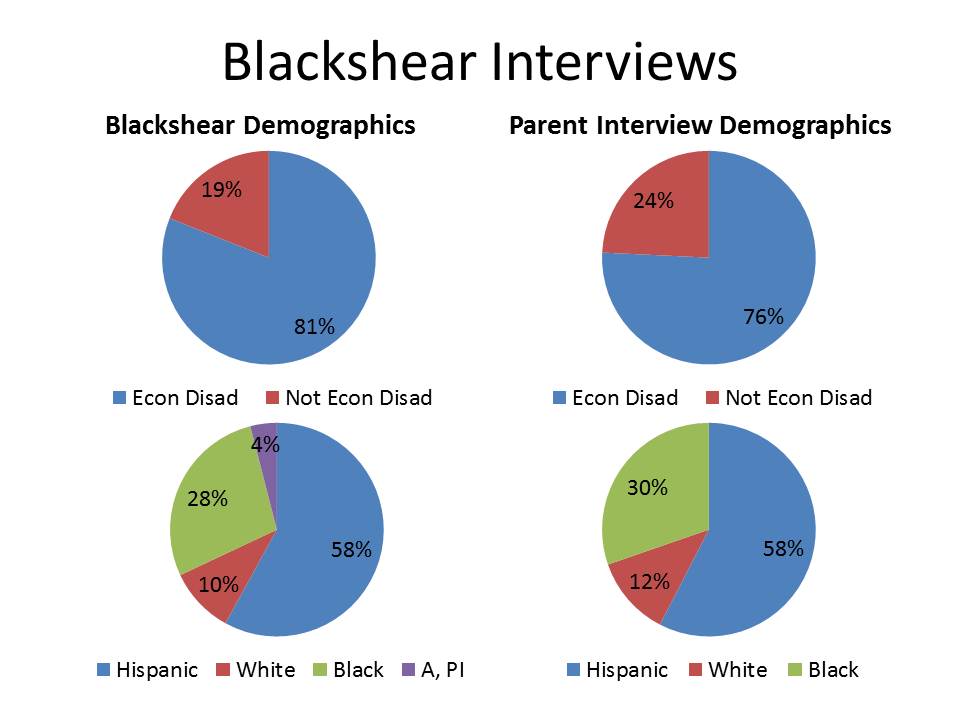 Both of the questions that I asked were open ended.  My first question was:  How do you feel about Blackshear?  Parents overwhelming said that they love the school.  97% of parents said they liked (or loved) the school.  There was a wide variety of characteristics of the school that they mentioned about Blackshear. 48% of parents mentioned strong academics.  48% mentioned the staff.  15% mentioned Blue Ribbon Award, and being proud that their kids go to a Blue Ribbon School.  42% mentioned Fine Arts programming.  It is interesting that a much higher percentage (88%) of  parents who are not economically disadvantaged mentioned Fine Arts as an attraction.  This indicates that the Fine Arts programming is what attracted many of these parents to the school in the past two years.

The second question that I asked was:  How do you feel about the changing demographics of the school.  Almost all of the parents (91%) said that they liked that there were all different kinds of students at Blackshear.  They valued having their children in classes with other children who didn't come from the same background.  However, 27% of the parents said that, though they liked the mix of the campus now, they were afraid that the minorities were going to be pushed out and eventually black and Hispanic students wouldn't be represented.  67% of the African American parents said that they were worried that the black students would eventually not be represented at Blackshear.  This was especially difficult for the black families at Blackshear, because they had such a long history of being in the neighborhood and the school.  The majority of the black parents that I interviewed had some other family connection.  Many went to Blackshear themselves, and some had parents and grandparents attend.  So the black children at the school now are often the second, third or even fourth generation at the school.

I also interviewed teachers, and they had similar responses to the parents.  Generally, they liked the changes so far.  They thought that having children from a variety of backgrounds was good for all of their students.  They said the children learned from each other, and built friendships across cultural boundaries.  They also said that they were concerned that the minority populations might eventually get pushed out.  The mission of the Fine Arts Academy is to provide arts to underserved youth.  If Blackshear ends up losing the economically disadvantaged population, they will no longer be fulfilling their mission.

Creating special programs at east Austin schools might attract more families who are not economically disadvantaged, and create more integrated schools in our district.  The issue will be keeping the diversity of the school.  Austin ISD will have to be proactive in admission to these special programs, or they will be at risk of losing their economically disadvantaged students.